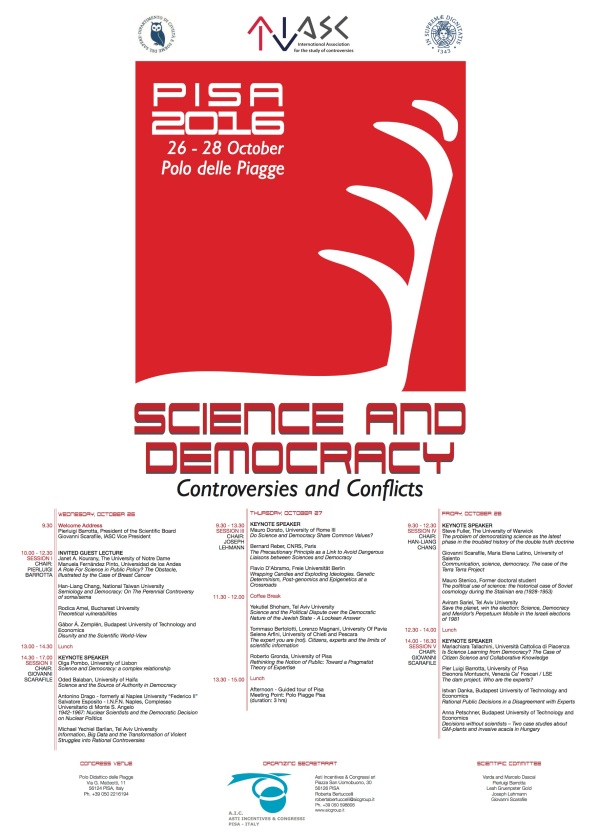 PDF OF THE FLYER OF THE PROGRAM

Commonsense dictates that science and democracy should not conflict. Science would only deal with the explanation and (possibly) the prediction of facts, while the scope of democracy would consist in the use of knowledge acquired by science. However, it is clear that science and democracy do not often respect this clear-cut division of labor. First, scientific community is not always unanimous and components of scientific community make alliance with components of society. In debates on global warming, biotechnology, nuclear power plants, homeopathy, GMOs, to name just a few examples, democratic procedures and scientific research are intertwined to such an extent that scientific controversies turn into political and social conflicts.

Furthermore, even when we have a fairly wide scientific consensus (like in some the above-mentioned cases) public opinion does not always accept it without question. How can we explain this phenomenon? Do we simply have to believe that the public is not fully informed on the results of scientific and technological research and is in some way misled by preconceived notions? Or should we say that despite the consensus the social and political consequences of scientific research are actually complex and unpredictable to the point of generating an understandable sense of uncertainty among the public? Or still, should we question the idea that science is morally and politically neutral? And if we drop the ideal of value-free science, would this justify the reduction of science to a mere ideology, as the most radical form of constructivism would like us to? Finally, all these questions spontaneously raise various regulatory issues, which are made more pressing by the fact that democratic societies not only use scientific and technological knowledge, but also have the duty to fund scientific research. For instance, what role should we assign to the scientific expert? How can we avoid slipping towards forms of technocracy? What should the correct policy concerning scientific research be? Do we need to involve the public in decision-making concerning research policy? And if this is desirable, how could it be implemented, given that scientific knowledge is often esoteric and difficult to understand for the public?

It is clear the interdisciplinary nature of these problems, which directly affect not only scientists and public opinion in general, but also philosophers of science, political philosophers, sociologists of science and technology, not forgetting philosophers of law, historians of science and political scientists. The aim of the conference is to provide a forum where the interaction of the approaches typical of each discipline takes place. The goal is not, it is hardly necessary to point out, to come to a “synthesis”, but it is our belief that the debates, when not confined within specific disciplines are perhaps the most difficult but potentially the most fruitful.

Please, note that the process of accepting proposals for the Conference is concluded. Deadline expired. For any further information, please contact:

Do you want to participate in the forthcoming IASC PISA International Conference on Science and Democracy?

1. Fill out the form below:

2. Pay the inscription fee (non IASC members: €50 – IASC members: €30). To do so, you have 2 alternative options (in both cases, you will receive a confirmation of your payment by the IASC Treasurer).

Account Holder: International Association for the Study of Controversies

2.1.1) Please, make sure to include your name and the conference title “Science and Democracy” in the description of the bank transfer.

2.1.2) After the payment is made, you need to send an email with the receipt attached to: treasurer@iasc.me AND vicepresident@iasc.me

OPTION 2) Using the PayPal button below.